This site is designed to teach the most basic elements of DSLR photography in the most simple way possible with examples to illustrate. The goal of the site is so that photographers new to DSLR photography from either proper point-and-shoot cameras or cell phone cameras are able to begin to maximize what DSLRs are capable of beyond their full-auto and pre-program modes (which are not covered here).
I am a Canon shooter, but you should choose whatever DSLR you use based on your personal preference. I will reference Canon and Nikon specifically as they are the most widely used, but everything here is applicable to every DSLR on the market today (as well as advanced point-and-shoots and mirrorless cameras that allow these adjustments). Please note! As this is not a "How to Use [X] Camera" site, I cannot possibly cover how to change each of the functions below on your particular camera. This site is best used in conjunction with your instruction manual, so that you can see how to make the adjustments below on your own camera.
Please see the labels right above this text to skip to various aspects of DSLR photography such as ISO, Aperture Priority, Etc. I have lettered these labels in the order that I believe they should be covered (although F. and G. could be switched) - so it's best to start with A. and go down the line.
Thanks for reading!

What you control:
1. How much of the image is in focus
2. Making the image lighter or darker

What is the range?
- This depends on the lens, and is measured in f-stops (say the 'f' - "eff-stops") also called 'f-numbers'. This can start as low as f0.95, or f1.2 (you'll pay for that privilege), but the most common lowest f stop on a lens purchased with a camera is f3.5.
- Most lenses regardless of their lowest f-stop will go up through either f22 or f32.

Note:
- The lower a lens' f number can go, the 'faster' the lens is considered.
- Anything below f2 is considered 'fast.'
- On most (but not all) zoom lenses, the greater you zoom in the higher the base f-stop becomes. For example, you might have it set to f3.5 when you're at 18mm, but when you zoom to 55mm the camera will read f5.6 even though you didn't change the f-stop.
Aperture Priority mode ('Av' on Canon and 'A' on Nikon) allows you to prioritize your aperture setting on your camera, which allows you to control how much of the image that you're taking is in focus. (Aside: the aperture is regulated by a set of 'blades' in the middle of the lens which you will generally not see, but don't worry, they're there.) 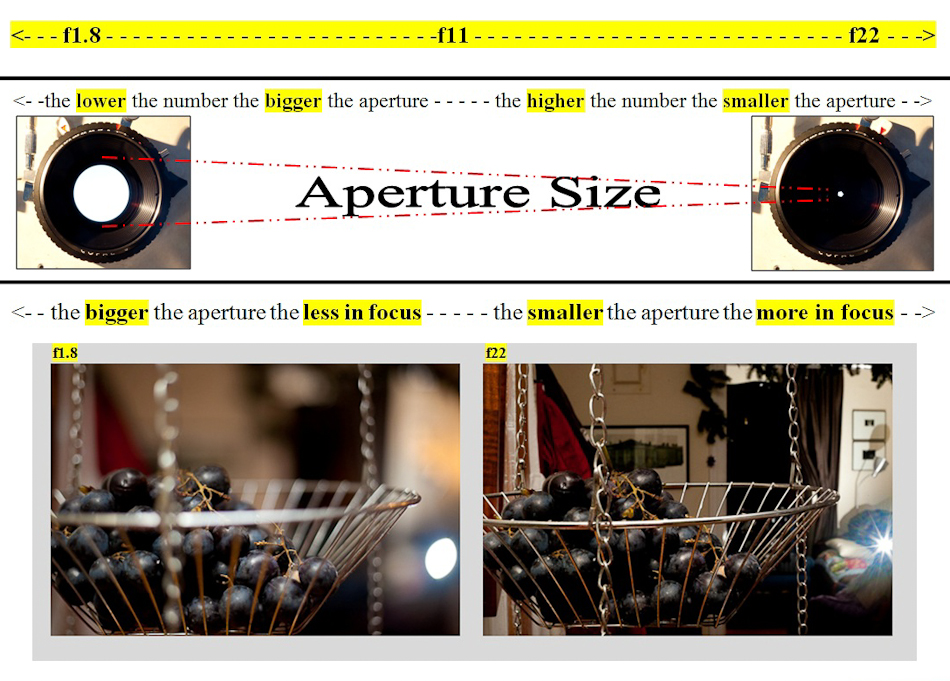 How to use Aperture Priority
- Choose your ISO
- Turn the control knob to 'Av' or 'S' (or other, depending on your camera brand)
- Choose your aperture (generally this is done on your main control dial)
- The camera will then choose the correct shutter speed setting to match your aperture.
- Take the photo you'd like to take (***if using a low f-stop, you'll often want to use 'maual autofocus' see Focus post above***)
- Review it on your camera's LCD (zoom into the image to check focus)
- If you don't like what you see, re-adjust your aperture setting
- As with P mode, you can change the exposure compensation to lighter or darker (the camera will NOT change your Aperture setting when it Av (A) mode: it will adjust your shutter speed)

Troubleshooting
"My photos are too dark!" If you're still having this problem after changing the exposure compensation, you probably have your f-stop to too high of a number for the light that you have available. Either turn your f-stop to a lower number or turn your ISO up to a higher number, or you can try using a flash.
Posted by Aemiessence Fine Arts at 14:14